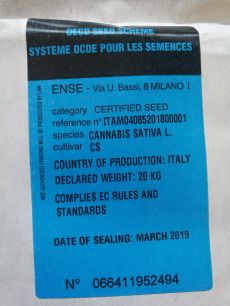 Carmagnola was well known in the 16th century and until the last World War was the favorite from civilian and Navy worldwide for the quality of its fiber. In the past Carmagnola has been also used to improve the varieties of other European countries and it's considered to be the root of the best crossbreeds obtained for industrial hemp.
Carmagnola is characterized by high vegetative force, great capability of adaptation, resistance to pathogens, marked heterozygotes, high ex