Whether they are whole, pounded, crushed, dried, cooked or peeled, hemp seeds make for an excellent culinary ingredient: for instance, from flour we can make bread and pastries; sprouts are used for sallads and soups; oil, well-known for being rich in unsaturated fatty acids and vitamin E may be used for sallad dressings and such. Through the process of hydrogenation oil is turned to margarine; peeled seeds go beautifully with grains and fruits for making műslies. Even seed hulls that remain after seed pressing are a good addition to your diet, since their protein is used to make icecream and cheese.

Due to its unique footprint, hempseed oil is known to both prevent and alleviate certain symptoms of various diseases. It prevents cardiovascular diseases, eases the undesirable symptoms associated with PMS and alleviates MS-related difficulties as does for types of cancer, shizophrenia and many other illnesses.

Hempseed oil contains the highly coveted ratio of Omega 3 and Omega 6 unsaturated fatty acids (that being 1:3) as well as having a considerable amount of the very beneficial GLA (gama linolenic acid) fatty acid which can be also found in breast milk. This special combination of fatty acids may be found only in hempseed oil. All in all it has much of mono- and polyunsaturated fatty acids (a total of almost 90%) which is of extreme worth to a person's diet. It is also very rich with essential aminoacids (it contains 8 of 9 essential aminoacids), a high amount of vitamins belonging to the vitamin B family and vitamin E.

Hempseed oil fatty acid content
Hempseed oil contains about 50 to 70 percent of linolic (Omega 6) acid and around 15 to 25 percent of alphalinoleic acid (Omega 3). Ingesting even the small amount of 10 to 20 grams of hempseed oil is enough to fulfill your daily requirements for the above mentioned fatty acids.

Hempseed oil is also used for various health purposes. GLA (gamalinolenic acid) is of crucial meaning for boostin your immune system and hempseed oil is the only edible oil which contatins this vital ingridient.
HEMPSEED OIL WORKS...
It is well known that is has a strong effect on brain functions, as well as regulatory properties for the body's metabolism, stimulates formation of new skin cells and hair growth. It has been beneficial in tackling the following health issues:

Hempseed oil has a beneficial effect with troubles caused by neurodermatisis, PMS, rheumatoid arthritis and diabetic neuropathy. Because of its relatively high content of Omega-3 fatty acids which actively intervene with the metabolism of cholesterol, hempseed oil also prevents early on-set trombosis and embolism.

Chronic inflammations are one of the effects of a weakening immune system whilst Omega-3 fatty acids halt the progress of inflammatory processes. This is why the use of hempseed oil comes so higly recommended as an aid for treating rheumatoid arthritis, chronic bladder infections,...
It my also help with treating psoriosis, ulcerous colitis and many other chronic inflammations of the bowel. On the other hand it may be a source of remedy for conditions regarding movement difficulties – joint diseases, the Omega-3 fatty acids are a great help when it comes to easing pain.
Hempseed oil is also used with patient suffering from AIDS, glaucoma, asthma, epilepsy and many other pain related conditions.
The use of hempseed oil in everyday diet has been known to reduce the probability of a heart attack – Omega-3 (alfa linolenic acid) prevents blood clodding and improves the overall blood cholesterol profile. With its natural anti-inflammatory qualities it is also beneficial for those suffering from arthritis and other auto-immune diseases.

The high content of Omega-3 and Omega-6 fatty acids along with a relatively high percent of phytosterols it is therefore thouroghly beneficial to the entire cardiovascular system. GLA has proven to be an effective source of treatment for rheumatoid arthritis and active joint inflammation. Also, GLA and vitamin D, both found in hemp are equally beneficial for preventing and treating osteoporosis. And, as already mentioned, products with a high content of essential fatty acids help to improve many different skin conditions (inflammations, loss of epithelial moisture, itchyness, slow healing of wounds).

Hempseed protein powder is gaind by cold-pressing hemp seeds. Through this process oil is excreted. What remains is left to dry and then ground into protein powder wich stil contains all of the essential hemp seed ingridients, only concentrated in protein content (striped of the large part of fat and fiber). This makes it ideal for athletes, especially after work out (to be consumed as a supplement in shakes or other beverages). It may also be used as a meal supplement and is therefore recommended for those battling exess body weight.

The main advantage of hemp protein powder is that it does not remain isolated from other nutrients but comes in accessable form (as nature intended) – along with other nutrients which apart from boosting muscle mass gain beneficially influence hair growth, skin health, eyes, the immune system and indigestion.

Many plant proteins are regarded as »imperfect« in the sense that they contain small ammounts of one or more of the eight essential aminoacids. This is somewhat misleading since all plant derived proteins contatin all of the essential aminoacids but in a large number of cases (i.e.grains, legumes) the quantity of one or more of there aminoacids does not meet the needs of an average diet intake, much less the one of an athlete.

Hemp proteins, on the other hand, do contain a satisfacoty ammount of each of the essential aminoacids and in a form that make them easily accesable to the body. Plant proteins get digested much easier compared to animal proteins – enzymes found in hemp protein powder help boost protein absorption and digestion and as a result less overall proteins need to be consumed, the rule of thumb being quality rather than quantity.

Apart from being indispensible when it comes to muscle tissue regeneration, hemp proteins are also wonderful for burning fat. Once proteins are absorbed into the blood stream they then provoke the release of hormones that enable a more efficient distribution of fat reserves – as a direct consequence we then notice better stamina and a more rapid loss of body fat (not forgetting to exercise regularly).

Of all known plant proteins hemp is thought to have the most alkaline effect on the body due to its high pH value. The preservation of ones alkaline body balance is of great importance since acidity has a negative effect on the entire human organism, sometimes shown as fatigue, loss of muscle mass and overall stamina.

Hemp tea is made by soaking dried crushed leaves (or the entire herb) in hot water – it falls into the category of herbal teas although it has a similar fenole profile as green tea. Hemp leaves and buds are picked by hand during blooming.
Numerous scientific studies have shown that drinking hemp tea on a regular basis has a number of positive outcomes:
When preparing the tea we are free to mix it along with other herbs such as lemon balm, thyme, elderflower,...or dried fruit, depending on our desires. Since it does not produce any negative side effects, it may be consumed several times a day. Dried hemp leaves are also appropriate to use along with fruits and vegetables in shakes and smoothies.
Cannabinoids, present in the hemp flower are not soluble in water although, if we put a bit of milk into the tea mixture, some cannabinoids will bond with fat molecules and as a result some non-psychoactive cannabinoids may be present in the tea such as CBD and CBN at extremely low levels. 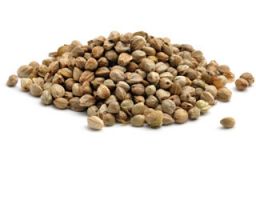